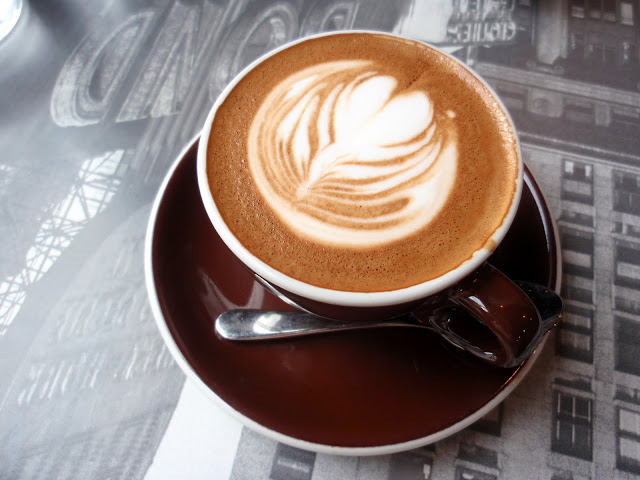 It's not exactly new anymore, but Ti Kouka Cafe on Willis St has fast won a place in my heart as one of my favourite new cafes. If I wasn't heading out to Miramar all the time I think I'd be here a lot more often: the food is good, they make the best damn strawberry milkshake of all time (I'm straining to think of a better strawberry shake I've had but getting nowhere), and on the couple of times I've been there the atmosphere was friendly and relaxed even though it was around noon on a Saturday: no big deal that it's peak weekend-brunch time or anything. 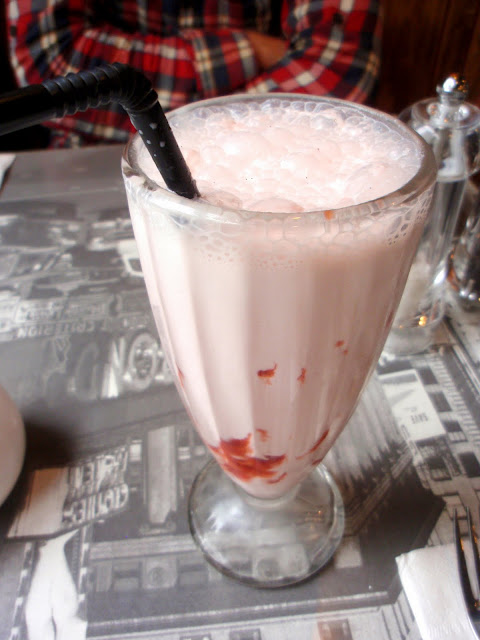 And the strawberry milkshake ($6): like I said. So. Incredibly. Good. That's real strawberry you see there, no artificial pink stuff here. And those little black flecks of vanilla? Always a good sign. This shake is, true to its name, a milkshake rather than a thickshake: it's light and almost fluffy-tasting and doesn't weigh your stomach down like a brick if you drink the whole thing. Which I did almost immediately. And then had to restrain myself from ordering another one. 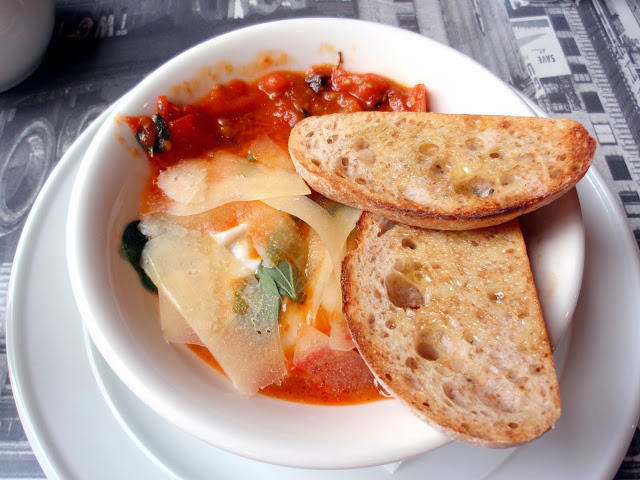 On my first visit to Ti Kouka I couldn't go past the smoked paprika & tomato baked eggs ($14, with chorizo). These were so, so satisfying. 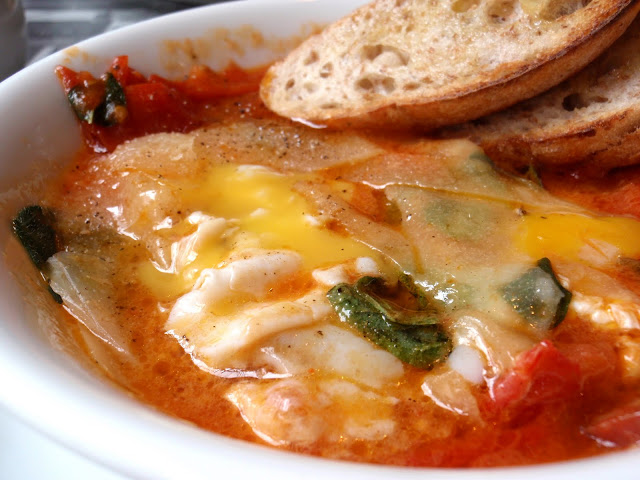 The eggs were cooked beautifully, with runny yolk spilling out into the earthy, tomato-y sauce, and the shaved parmesan melted into everything: delicious. I ate this almost like a soup, taking big slurpy spoonfuls or eating it with the sourdough toast. 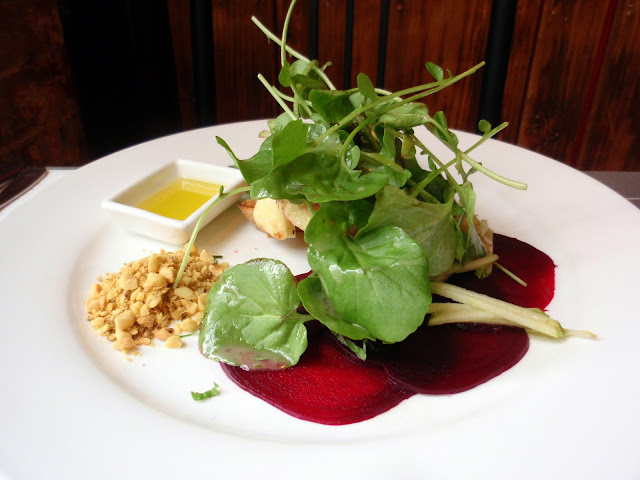 E had the grilled haloumi with apple, beetroot, bread & dukkah ($16). I was enamoured with the presentation, especially of the salad: wafer-thin slices of beetroot topped with little baby beetroot (it's hard to tell from the photo) and thin slivers of green apple. 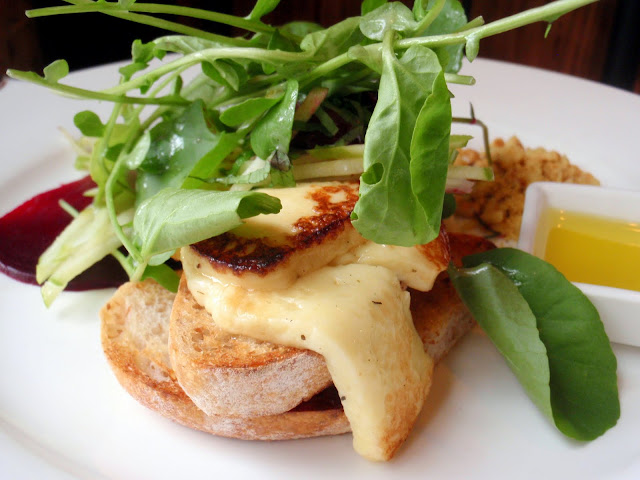 The halloumi and salad were good, but I thought the real star of this dish was the dukkah: nutty, aromatic, beautifully spiced. I would take some home in a jar if I could. 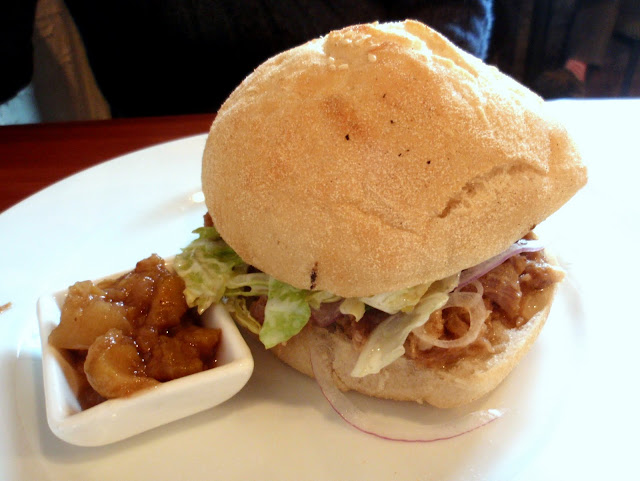 On another visit (and please excuse the bad photo, but I really, really want to share this) E had the pulled pork roll ($12). And I'm not sure if I was on a high after guzzling another one of those strawberry milkshakes, but after taking a bite of this sandwich I was ready to proclaim it the best sandwich in Wellington.

The pork was melt-in-your-mouth soft, contrasting with the crunch of the iceberg lettuce and paper-thin red onion. And the bun: substantial enough to hold together all this saucy goodness, but still light and almost fluffy*; I couldn't stop sneaking bites, even after I was bursting.

The sandwich came with feijoa chutney which appeared to be homemade, and again, if I could take it home in a jar, I would. 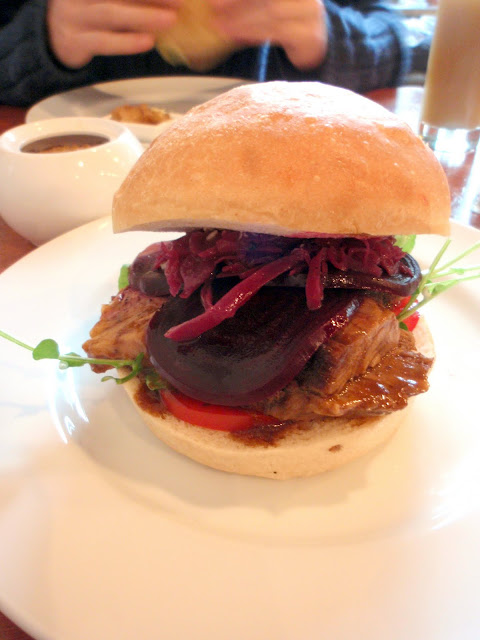 I had the sticky beef burger ($15). Rather than your everyday mince patty, this burger had a slab of slow-cooked, falling-apart beef, with usual burger accompaniments like tomato and beetroot, as well as the more unusual braised red cabbage (which was lovely, by the way).


The only things that could've been a bit better with this one: a bit more salt on the meat/sauce (which was easily fixed) and maybe toasting the bun to combat sogginess - the combination of the meat, tomato & beetroot juices soaked right through the bottom half - but otherwise this burger was delicious. 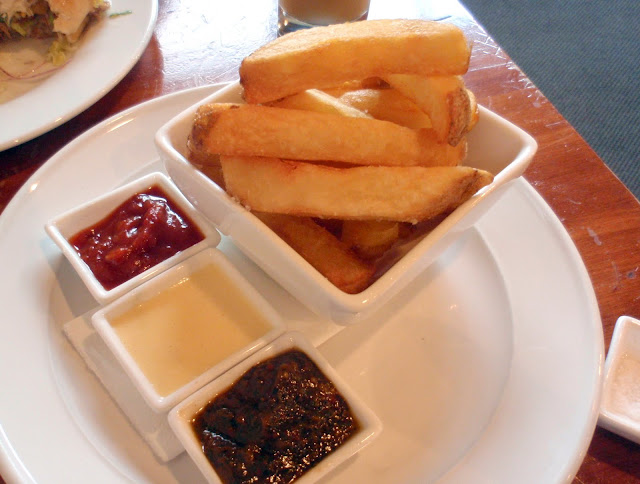 These big, chunky chips ($7.5) had been on my must-try list ever since reading Laura of Hungry and Frozen's comment on this post over at Mrs Cake's blog. They were definitely up there with other notable chunky chips I've had (comparable to the ones at the Larder) but made a bit more special by the fact that they came with homemade tomato sauce, aioli (which tasted homemade as well - bonus) and harissa.**

So if I can tear myself away from heading eastwards to Miramar for a Saturday brunch you can bet this is where I'll be. It's in a good spot for weekday lunches, too, though a bit too far from work for me (and I've been saving for an overseas trip so have cut back on bought lunches). I only wish they were open a bit earlier on weekdays (they open at 8) so I could get there for a pre-work breakfast, or that they closed a bit later than 6:30/7pm... though admittedly that end of town does become a bit dead after that time anyway.

I love this place! And want to go back so bad...Never tried their milkshake but suspect I'll have to order one if I do return on the basis of your review of it. On that note, glad my recommendation of the chips didn't let you down!

So glad you reviewed this cafe. I went there once when it was still Kapito and was unimpressed with both the service and food. Haven't been tempted to go back there since, even after the change of name. Think I'm going to enjoy the baked eggs dish very, very much!

Well, well, well. I never thought there was anything worth tramping for in Willis Street but how wrong I was. Look forward to trying this out soon. On this recommendation I shall have to try that milk shake.

I have a watering hole request if you haven't already done it...the beer garden where the greek restaurant used to be by the kfc by your old pad.

I have just found this blog (via - this blog) and what a gem! PLEASE GO AND EAT SOMEWHERE ELSE SO I CAN DO IT TOO! Vicariously...

The lastest entry on the old Katipo cafe (Ti Kouka) has actually encouraged me to go up there; it's one of the places you just walk past and never really give a 2nd look at, but now - those chips have sold me!

what I'm eating at home